#CatalanFood, an alliance of chefs and specialities to show the strength of Catalan food and agriculture to the world

The Government of Catalonia’s Ministry of Agriculture, Livestock, Fisheries, and Food, through Prodeca, has produced a video designed to highlight the virtues of the Catalan countryside and its products, in the words of those who best represent it – the chefs who work with it. Altogether accounting for 26 Michelin stars, each of the 13 celebrities involved is associated with one Catalan food product they talk about in individual 1-minute videos and one joint 5-minute version which outlines the excellence of some of Catalonia’s best-liked and most-exported foods. 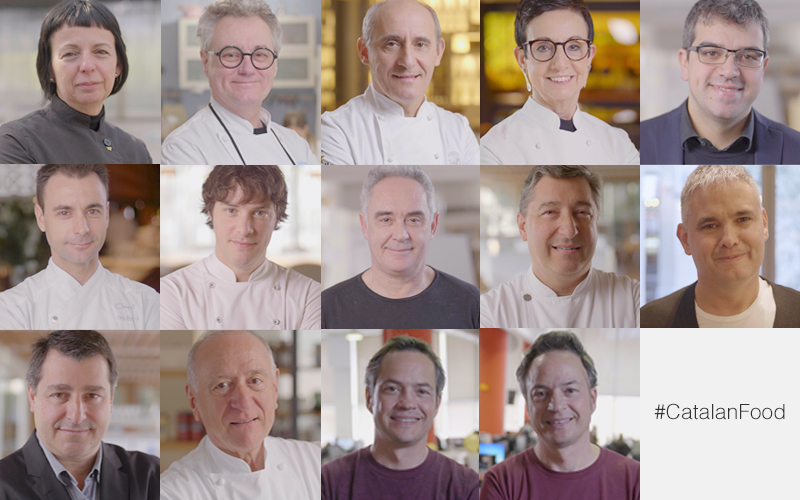 Carles Gaig (Gaig*, Barcelona), for whom the Catalan countryside “is a small continent, with a wealth of different landscapes”, talks about beef and poultry;  Eduard Xatruch (Compartir, Cadaqués, and Disfrutar**, Barcelona) discusses the merits of olive oil “which has marked our culture and whose character is a surprise to foreigners”; Joan and Pitu Roca (El Celler de Can Roca***, Girona) praise lamb and wines, respectively; Jordi Cruz (ABaC***, Barcelona) highlights the joint work that “we, chefs and growers, carry out, for instance with fruit”; seven-Michelin-starred Carme Ruscalleda talks about legumes and ganxet beans, “our white caviar”; and Sergio and Javier Torres (Dos Cielos**, Barcelona) comment on the outstanding variety of cheeses found throughout Catalonia. In a eulogy to “the unquestionable pleasure of enjoying a drink and a few mussels by the beach”, five-Michelin-starred Paco Pérez (Miramar**, Llançà) tells us about fish; Fina Puigdevall (Les Cols**, Olot) praises the virtues of the climate “perfect for the final drying of our amazing cured pork products”; Nandu Jubany (Can Jubany*, Calldetenes) focuses on local pork; while pastry chef Christian Escribà reviews our traditions and the use of chocolate in “cakes, ice cream, chocolates and countless more desserts”.

El Bulli, which held the top spot in The World’s 50 Best Restaurants list five years running, will also be participating in #CatalanFood. Its sommelier, Ferran Centelles, now at elBullifoundation, highlights the versatility of Catalan cava, and its chef, Ferran Adrià, boils everything down to an ode to pa amb tomàquet (“tomato toast”), “the dish that best represents Catalonia’s gastronomy. It is basic yet extraordinary, straightforward and complex at the same time. Every Catalan has their own version. It’s magical”.

#CatalanFood is part of the Gastronomy Plan for Catalonia aimed at the industry’s international development and raising the profile of Catalan food products abroad, particularly in terms of quality. The video will be shown at international trade fairs, trade missions and other events related to the globalization of Catalan agriculture and food products and companies.

The video will portray Catalonia’s pantry, a treasure trove of countless food products thanks to the region’s varied landscapes and climate conditions. It will also serve to show how its products and manufacturing base serves gastronomy with substantial international potential. It is, therefore, no surprise that Catalonia has the greatest number of Michelin-starred restaurants in the Iberian Peninsula, with 54 restaurants featured in the French guide, more than twice the 22 held by the runner-up, the Basque Country. Of the 54, four boast the prized 3 stars (ABaC and Lasarte in Barcelona, El Celler de Can Roca in Girona and Sant Pau in Sant Pol de Mar), six have 2 stars, and the remaining 44 hold one. Additionally, three Catalan restaurants feature in The World’s 50 Best Restaurants’ list (El Celler de Can Roca, #3; Tickets, #25; and Disfrutar, #55).

Agriculture and food, one of Catalonia's most dynamic industries

The agriculture and food industry’s turnover amounts to 25.2 billion euros. It directly employs 75,700 people and accounts for 18% of total manufacturing employment, 18.6% of GDP (2014) and 15.7% of Net Value Added. In the last decade, the Catalan food and drinks industry has been working towards international development and export value has soared by 92.16%. A constant increase in value in the last ten years (4.64% in 2017) and growth rates above those of other European countries with similar export potential corroborate Catalonia as one of Europe’s leading agriculture and food clusters according to the latest European Cluster Observatory data. For instance, export growth in value in Europe’s main export countries has been slower: France, 3.80%; the UK, 3.05%; Italy, 1.25%; Germany, -1,66%.

Prodeca is a public company under the authority of the Department of Agriculture, Livestock, Fisheries and Food of the Catalan Government whose purpose is to promote Catalan food products nationally and internationally. It provides foreign trade and export development support to Catalan companies through assistance attending major international agriculture and food trade fairs, export initiation programs, market diversification schemes, promotional activities and helps to consolidate a presence abroad. It organizes business meetings between Catalan companies and national and international market operators, as well as trade and cooperation relations with other countries.

Prodeca is actively involved in Catalan gastronomy initiatives aimed at promoting and improving agriculture and food products’ and companies’ positioning.